(NOTE: This is a two-person review; Deuce came up with the idea, so his text is normal. He asked Sitzman (aka “Ryan”) to join in on the review, so his comments are italicized)

DEUCE: All I knew was that Life of Pi was a book, written recently, that was about a boy in a lifeboat, on the ocean…with a tiger. That was it. And, essentially, in the movie at least, that really is it. When people would talk about Life of Pi or I would come across it somehow, and though it did have quite a bit of it, I always envisioned a story laced in fantasy and philosophy. The story in the movie, at least, exhibits more realism and less metaphor (except for the end — Holy cow!!), which I previously thought I’d be encountering. I was expecting the main drive of the story to involve deep, thought-provoking meaning-of-life conversations between human and tiger. Shows you how much I really knew about this… [tag!] 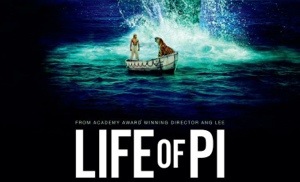 SITZMAN: I was glad that Deuce asked me to do a tag-team review on this movie, since it gave me a chance to revisit the book, too. I had read the book about 8 years or so ago, right around the time it came out. I think I may have even read it twice. And I’d seen the movie, too, but I also re-watched it specially for this review. Not that I’m complaining, though: if need be, you can get through both on a long, boring Sunday afternoon, like I did. But right away, I’ll build up suspense and not indicate which was better: the book, or the movie. [tag!]

DEUCE: So, I knew Life of Pi existed and, to prove it, Djake saw it and reported back to me. He told me it was really, really good, and the cgi on the tiger was really, really good, too. Yeah, I’ll get around to seeing it, I thought. It’ll be on Redbox soon. Well, it was soon, and I got a text from Redbox giving me a code for a free rental. We took advantage.

“Let’s watch it on the downstairs tv,” Sam suggested. I’m glad she did so. The visuals and sound were perfect. If we would’ve watched it on the upstairs system (normal tube tv with tv-speaker sound, and old dvd player), I wonder what I would’ve missed, because Djake was right — the special effects were astounding. Probably more than astounding, actually. I’d go as far to say that Life of Pi has the best cgi of any film. Yup. I’m pretty sure the actor who played Pi was in front of a green screen quite a bit, but it looked SO real, and the attention to detail really, really… REALLY paid off here. I don’t think that was a real tiger, but it looked so, SO real. [tag!] 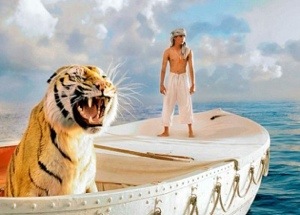 SITZMAN: Actually, Deuce is completely right. I feel like a bit of a dumbass admitting this, but I didn’t actually know that tiger was CGI. Considering that my dad does dental work on tigers (this is true), that may make me sound especially like a dumbass, but let me defend myself a bit. I said I didn’t know it was CGI, but that’s because I didn’t think about it. And to me, that’s a testament to how well the movie was done: It was so masterfully blended that you didn’t even notice where human stopped and computer began. But the ability to animate animals to such a precise and complete degree really astounded me. [tag in, Deuce, help me!]

DEUCE: The story in Life of Pi has so many layers. However, when watching the film, familiar thoughts and emotions came back from when I was, and still am, interested in lost-at-sea non-fiction books. This was probably the main reason why I liked the film so much. I enjoyed the film pretty much on that one degree alone: it was essentially a shipwreck story. Many people can attribute their enjoyment of the film to many, many other qualities, but mine doesn’t go too deep. I don’t want to pull away from my thoughts about the movie here, but I want to use this space to share my favorite lost-at-sea books (hey, come on! It’s very rare I talk about books, so I’m just gonna endulge myself and plug away here):
1) Island of the Lost: Shipwrecked at the Edge of the World by Joan Druett: A group of four sailers are stuck on an island for almost two years and plan a harrowing journey back to New Zealand, 285 miles to the north.
2) Unbroken: A World War II Story of Survival, Resilience, and Redemption by Laura Lillenbrand: American bomber pilot (and Olympian) Louis Zamperini’s plane gets shot down over the Pacific. He survives with a couple of his co-pilots. He endures 47 days on a raft on the ocean fighting sharks, thirst, and starvation only to be captured by the Japanese and tortured everyday for another three years in prisoner camps.
3) In the Heart of the Sea: The Tragedy of the Whaleship Essex by Nathaniel Philbrick: Many people say this is the story that Herman Melville got his ideas for Moby Dick.
4) Adrift: Seventy-Six Days Lost at Sea by Steven Callahan: Sailing by himself in the Atlantic, Callahan’s boat has an accident and he has just seconds to grab what he can into an air raft and hope for the best.
5) In Harm’s Way: The Sinking of the U.S.S. Indianapolis and the Extraordinary Story of Its Survivors by Doug Stanton: Remember in Jaws when Robert Shaw tells the story of when, during WWII, his ship is sunk by a Japanese torpedo and hundreds of sailors float in the open ocean for days drowning or getting eaten by sharks, ending his shocking story by saying “We delivered the bomb”? This is that story. [tag] 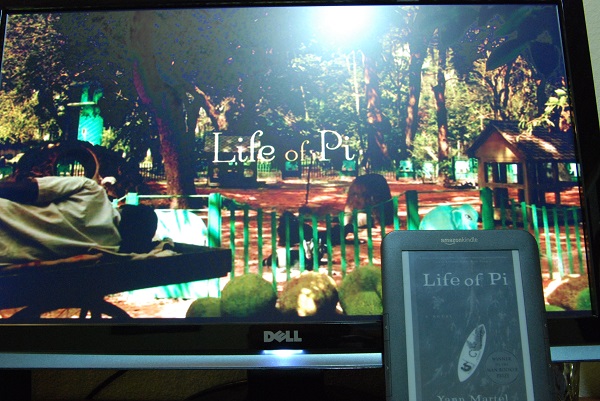 A double serving of Pi. And yes, I should be slapped for that pun.

SITZMAN: Since we’re getting bookish now, I’ll get into the real question I’ve been dealing with a lot this year in my book and movie projects: can the movie ever be better than the book? In this case, you may even be able to argue “yes,” but with a few qualifications. The main reason I’d be inclined to say the movie is better is because so much about the story is so visual. Yann Martel is a very good descriptive author, but you can only describe clouds and water in so many ways before your brain shuts off and fills in a mental stock image of both. The movie makes all of that jump out and amplifies it in a wonderful way. That goes also for elements like the animals (which, again, I can’t believe computers these days can do that kind of stuff) and boat descriptions (which, to be honest, I don’t really give too much of a shit about–if I read the words “aft” or “gunwhale” more than once, my eyes simply glaze over, but if I can actually see Pi moving about the boat, that’s much better since I don’t have to care what the different parts are called).

Of course, there is always more story in a book, and this is certainly true with Life of Pi. I think the first 30 or 40 percent of the book dealt mainly with Pi’s life in India and his various religions, and the part on the boat comes quite a bit later and seems to almost be a completely different short story. I liked the religious exploration aspect that was more prevalent in the book, but the movie did do justice to it, while blending it a bit more with the boat story. I think Deuce is about to wrap up his thoughts, but if you stick around afterwards, I’ll give you a few of my favorite quotes from the book. [tag!]

DEUCE: Well, in the end, Life of Pi is my second favorite film of 2012 (behind Django Unchained). The end left me wanting to watch the movie over again, multiple times, so I’m definitely going to purchase it on Blu-Ray someday soon. 17/17 on the Sitz scale. [tag]

SITZMAN: I’m not sure I can give it a 17/17, but it’d be pretty close. The main reason is I think I just got over-saturated with Life of Pi in the last few days, and its “re-watchability” declines a slight bit if you’ve already seen and read the story a few times. But only a slight bit, because there’s so much to see. I’d give the movie a 15/17 and the book a 14/17, but I’d increase each a point or so in a few months, probably.

Anyhow, here are my two favorite quotes from the book, for any of you who’ve made it this far:

1. (There is a lot in the book that talks about how zoos are actually not so bad; I’m not sure how to square this with a lot of what humanity in general thinks about zoos, but it is interesting fodder for thought or debate. In any case, here he’s been talking about how many animals are actually more comfortable in zoos): “If you went to a home, kicked down the front door, chased the people who lived there out into the street and said, ‘Go! You are free! Free as a bird! Go! Go!’–do you think they would shout and dance for joy? The wouldn’t. Birds are not free. The people you’ve just evicted would sputter, ‘With what right do you throw us out? This is our home. We own it. We have lived here for years. We’re calling the police, you scoundrel.'”

2. (I wanted a quote that was representative of the role religion played in the book. But I forgot to mark one, so I’ll have to go with this completely different one instead): “I have nothing to say of my working life, only that a tie is a noose, and inverted though it is, it will hang a man nonetheless if he’s not careful.”

So, that’s it for our joint review–thanks for reading!

3 thoughts on “Life of Piscine, Tag-Team!”