I recently watched the adaptation of Michael Crichton's 70's bestseller, The Andromeda Strain directed by the great Robert Wise (The Haunting, The Day the Earth Stood Still). The movie was alright, I gave it a 12/17, but that's not what I'm here to talk about. What I AM here to talk about is the fact that the film is Rated G for General Audiences. Now first, let me give you a quick plot synopsis: a group of doctors and scientists are taken to a small New Mexico town where all of the inhabitants END_OF_DOCUMENT_TOKEN_TO_BE_REPLACED
I haven't written a review in a very long time. There were lots of reasons, the main reasons being, A.) I am very lazy and 2.) I had a horrible experience a month ago when my VERY long treatise on David Bowie's new album in 10 years, The Next Day, was unceremoniously deleted when I tried adding pictures. I felt like WordPress had betrayed me and I felt like it would be cowardly to turn back to it. I have decided that was completely idiotic and finally found a movie that sparked my opinions enough END_OF_DOCUMENT_TOKEN_TO_BE_REPLACED
This week on Djake Exploits the Attic, I'm going to review the 1980 Italian "infected people" (don't call them zombies) gorefest, Nightmare City. Directed by Umberto Lenzi, infamously known for his Cannibal Holocaust rip-off, Cannibal Ferox (aka Make Them Die Slowly), and starring Hugo Stiglitz ("everyone in the German Army has heard of Hugo Stiglitz"), a Mexican actor who moved to Italy in the 70s to make exploitation flicks. The story is fairly simple: a military plane carrying a famous scientist END_OF_DOCUMENT_TOKEN_TO_BE_REPLACED
Djake here with the first post in a new series Deuce and I have been talking about in which we review a new exploitation or B-movie each week. An exploitation film is basically a low-budget flick that can't rely on big name stars, special effects or good writing and instead finds something to "exploit" to make money. That may be gore, sex, cheerleaders, kung fu, slavery, car crashes, the spaghetti west, aliens, revenge, chainsaw massacres, naked nuns, any number of things really. They were mainly END_OF_DOCUMENT_TOKEN_TO_BE_REPLACED 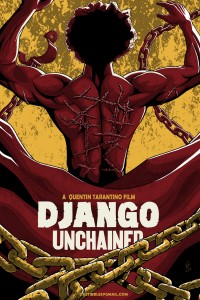 Good Evening! Tonight we'll continue looking back at 2012 with a review by Djake ("The D's silent," he assured me). This movie also made our group's Top 12 list, even though it came out in the final week of 2012. It's also currently leading our Readers' Poll of The Best Movies of 2012, which you should be sure to participate in by going here. Anyhow, without further ado, here's the review: Djake: I knew I would love Django Unchained as soon as I heard Quentin Tarantino was making a "Southern" END_OF_DOCUMENT_TOKEN_TO_BE_REPLACED