Djake here with the first post in a new series Deuce and I have been talking about in which we review a new exploitation or B-movie each week. An exploitation film is basically a low-budget flick that can’t rely on big name stars, special effects or good writing and instead finds something to “exploit” to make money. That may be gore, sex, cheerleaders, kung fu, slavery, car crashes, the spaghetti west, aliens, revenge, chainsaw massacres, naked nuns, any number of things really. They were mainly shown at drive-ins or “grindhouses,” which are rundown theaters in shady neighborhoods that specialized in these films (as well as a healthy dose of porn). While these aren’t always the BEST films out there, they are usually almost always enjoyable, exciting, disgusting or unbelievable and actually inspiring, in that even the most inept person alive can still make a movie as long as they’re passionate enough (or sometimes, rich enough). 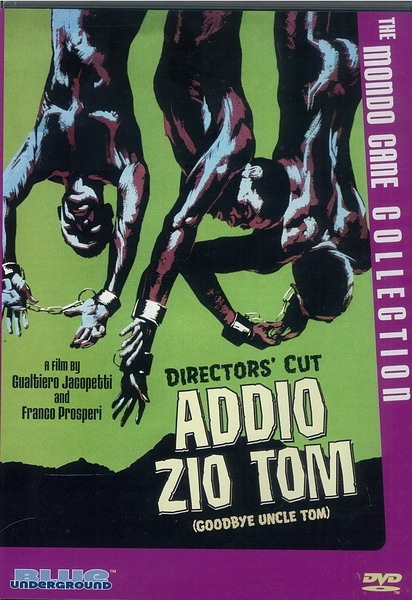 This week, I watched the “shockumentary” Goodbye Uncle Tom by the Italian documentarians Gualtiero Jacopetti and Franco Prosperi. Here is a quick film history lesson, friends! Jacopetti and Prosperi invented the shockumentary with Mondo Cane (1962) which was basically a showcase of the most absurd, shocking events they could find around the world. While these films began as real documentaries, most of them started incorporating fake reenactments and gore effects until they became pure exploitation. They continued into the 1980’s with the popular Faces of Death series (which I refuse to watch) and fake snuff films and eventually died out with the invent of the Internet.

Goodbye Uncle Tom begins with Jacopetti and Prosperi somehow traveling back in time to the per-Civil War American south to make a documentary on slavery. The strangest thing about this is that the film never makes it seem absurd or strange in the slightest. They just wanted to make a doc on slavery so they jumped in their helicopter, gunned it to 88 MPH and automatically ended up back in time. When they arrive, all the slaves and slave owners simply wave at the helicopter as it blows about their bushels of cotton. Inexplicably they don’t find it weird that a flying machine with giant blades appeared out of nowhere. The filmmakers begin to interview people around the south but never mention the fact that they’re carrying cameras which would obviously seem strange to these people. Famous “celebrities” like Harriot Beecher Stowe show up randomly to give insight on slavery. Very strange. It actually confused the hell out of me that a movie like this can get made and no one at any point ever mentioned how weird the time travel aspect is.

When it comes to their depiction of slavery, they hold nothing back. A title card at the beginning reads “THIS FILM IS COMPLETELY TRUE. NOTHING WAS FABRICATED FOR ENTERTAINMENT” At one point a slave ship is shown with literally hundreds of naked men chained together in tiny bunk beds as they are urinating and diarrhea’ing all over each other. The men are fed pig fat, cornmeal and grain. One slave refuses to eat so they jam a large chisel in his mouth, break his teeth with a hammer and force feed him the “food”. The entire film is filled with these scenes of extreme depravity and gruesomeness. I read an interview with the filmmakers where they claim to have made the film in response to being called racist following their earlier Mondo shockumentaries. While i applaud their decision to graphically show American slavery in excruciating detail, the way they do it is just wrong on so many levels. Many of the scenes show gratuitous amounts of female and male nudity not for “historical accuracy” but titillation. The fact that they are exploiting such a disgusting part of American history makes them seem even more irresponsible, if not racist.

I don’t think I can recommend this movie to anyone unless they are in the mood for something horribly offensive, depressing and gross. It ranks alongside Salo: 120 Days of Sodom, Cannibal Holocaust and Men Behind the Sun (about the Japanese experimenting on the Chinese during WWII) as one of the most disturbing, shocking films I’ve ever seen. I give it a 10/17 only because I can’t stop thinking about it.

Eli Roth does a fantastic commentary of the trailer over at the great website Trailers From Hell. Check it out!