This is actually Ryan, despite the title of this post. Last night I saw the 2011 movie Paul. But if the title of the post gets Paul out of seclusion to comment on the blog or write, even better. 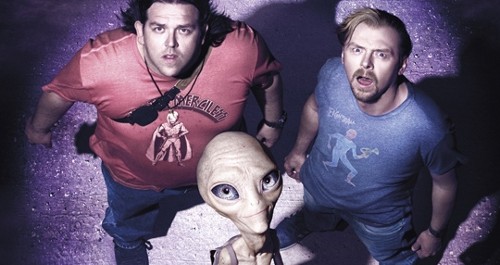 If you’ve not seen Paul, it’s basically about two nerds that go on a post-Comicon tour of UFO sites in the southwest US, only to actually find an alien. The alien is named Paul, and he’s just escaped from a government facility and is trying to meet up with his own kind. He’s evidently from a raunchy galaxy because he’s funny and talks a lot of crap. The movie follows the three of them as they try to take Paul to a rendezvous point, pursued all the while by authorities and an ultra-religious father-daughter family.

The movie was good in general, although it didn’t have as many laugh-out-loud moments as some of Simon Pegg and Nick Frost’s previous movies (Shaun of the Dead and Hot Fuzz, both of which I thought were excellent). In this case the two guys take a backseat to the alien (voiced by Seth Rogen) and the other supporting characters. And that’s actually OK, since the supporting characters really carry the show in this movie. The religious girl is portrayed excellently by Kristen Wiig, and watching her learn to swear effectively was a slut-farting, hairy-boobed delight, as she might say. The various law enforcement people are also pretty good, too.

So if you’ve not seen it, definitely do check it out, but after the other two movies I mentioned above. Or, I guess check out this one first, and then work your way up to the others to get more and more laughs. Actually, yes. That’s a much better idea.