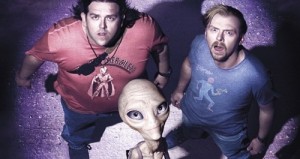 This is actually Ryan, despite the title of this post. Last night I saw the 2011 movie Paul. But if the title of the post gets Paul out of seclusion to comment on the blog or write, even better. If you've not seen Paul, it's basically about two nerds that go on a post-Comicon tour of UFO sites in the southwest US, only to actually find an alien. The alien is named Paul, and he's just escaped from a government facility and is trying to meet up with his own kind. He's evidently from a raunchy galaxy END_OF_DOCUMENT_TOKEN_TO_BE_REPLACED