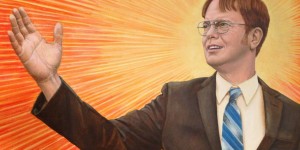 I really liked the British original series of the same name, so I was initially skeptical 9 or so years ago when they made an American version. Why mess with something that was so great, right? Well, they did mess with it, but they tweaked it in a way that really gave the American version its own flare. It was less mean-hearted, and a bit more on the absurd side, which played well with me. END_OF_DOCUMENT_TOKEN_TO_BE_REPLACED