— From Shaun Of The Dead

There’s an ongoing practice/idea/trope in zombie movies that the people never say the word “zombie.” I guess that’s because zombies don’t exist, and to call these creatures that are emerging “zombies” would be to admit that they’re real. OK, that’s kind of weird, but I guess it makes at least some sense. In a lot of zombie movies, the characters call the zombies “undead,” “infected,” or some other name like that. There’s even this Tarantino interview that Jake pointed out in one of his posts, which points to the strange practice:

I’m mentioning this because I’ve been reading a few “zombie” books lately, most notably the series called The Remaining, which I got for free on my Kindle. It’s pretty good, but it does call the zombies “infected.” I understand why, too, but what I don’t understand is this: The people in the book are thoroughly in the present day in terms of pop culture, video games, music, clothing, etc, but they all seem baffled when it comes to killing the infected.

If I were ever in a zombie apocalypse (or “infected” apocalypse or whatever) and I saw a zombie walking towards me, I wouldn’t think, “Oh dear, how will ever dispatch of this zombie? It must be indestructible!” No way! I’d just say, “Oh shit! It’s just like in every zombie book and movie ever made! Hey everyone, just destroy its head or brain and let’s go home!”

Anyhow, that’s what I’d do, but I guess I’m glad there’s not been a zombie apocalypse yet, since I’d have to put my money where my mouth is. 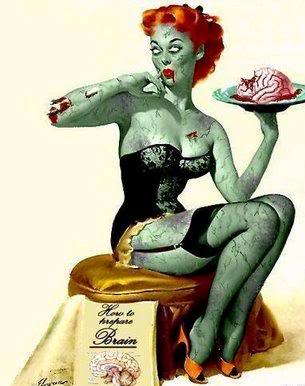 There’s a whole sub-world on the Internet of “sexy zombies.” Have a look and be weirded out.