In a recent post we were talking in the comments about movies that make us cry. I happened to mention that as far as I knew or could remember, I couldn’t think of any movie that had made me cry. I was like the guy in this Johnny Cash song:

But the timing was impeccable, because just a few weeks later we watched Hachi (also known as “Hatchi,” “Hatchiko,” and “Hachi: A Dog’s Tale,” for whatever reason). This little-known gem is a 2009 movie directed by Lasse Hallström that I found on the Entertainment Weekly list of 50 Best Movies I’d Supposedly Never Seen. Hallström is the Swedish director who brought you all kinds of emotional movies, including Mitt Liv Som Hund, so his pedigree (pun intended) of heart-touching dog movies is top-notch. (Fun Fact I Didn’t Know Before: He also directed a staggering number of ABBA videos–seriously, check out his stats.) Anyhow, Hachi stars Richard Gere and the cutest freaking Akita puppy you can possibly imagine: 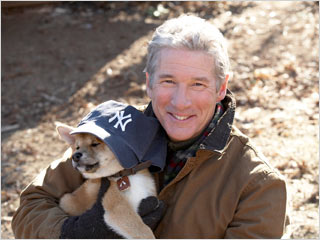 Awww, who can turn away a cute little creature with such an adorable little face? And the dog’s not too ugly, either.

The strange thing is, it never got a release date in the US, so it’s not very well known, apparently. I won’t tell too much about the plot, but the movie is quality. It’s based on a true story of a very faithful dog. And yes, it’s a bit emotional. To call this a “tearjerker” is not quite correct. Hachi will jerk tears out of you, sure. But Hachi will also haunt your emotions. Hachi will punch your heart in the balls. Hachi will grab your tear tear ducts, hold a gun to their heads, and blindfold them in the bank safe, holding them hostage until the police meet its demands –namely: a helicopter; a million dollars in unmarked, nonconsecutive bills; and a single tear to trickle down every viewer’s cheek.

And strangely enough, there was indeed a single tear that rolled down my cheek as I watched the end of this touching movie. I might have even had a second tear in me, but I was distracted since I had to attend to my bawling wife. But I can now say that I have indeed cried for a movie.

And knowing is half the battle. 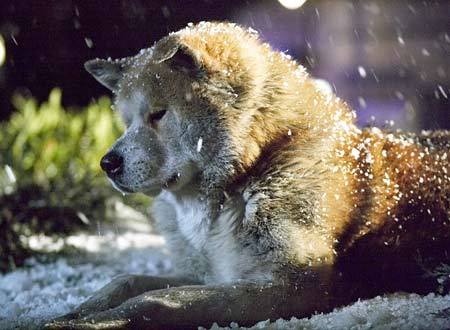 Oh, what do we have here? A faithful old dog waiting in the snow for his master? Uh oh, here we go!

Anyhow, I’d give this movie a 15/17. It’s very good, and the dog will charm your pants off and put them on your head, but now that I’ve seen it, any subsequent viewings would be spent trying to avoid the emotional build-up to the end. That just seems exhausting, and worth about 2 points on a 17-point scale.