The 2004 Indian Ocean tsunami hit the big screen in dramatic fashion last year.  The Impossible documents the amazing true story of a family of five facing the deadliest tsunami in recorded history (230,000 killed).  Not since the spate of disaster movies of the mid to late nineties has a family been up against such– and I’m already running out of synonyms here–insurmountable odds.  And to add insult to injury they’re on vacation in a foreign land, Thailand to be precise.

There is a ton of foreshadowing at the beginning of this movie…I’m just saying.

You might vaguely remember this amazing story when it came over the airwaves nearly ten years ago on NPR.  Just a side note, the family was actually Spanish not English.  If you haven’t heard it, I don’t want to give anything away; but a couple of posters sure do and you could make an argument that the title itself is a giveaway.  That’s not really the point; it’s the family’s struggles, both emotional and physical, that will pull at your heart strings.

The film starts with a serene looking ocean and then there is a jolt and it ends lingering on the same body of water, as still as it was before, but now much more dreadful.  The tsunami scenes are quite harrowing and amazing to watch.  I’d be curious to see how they filmed it because a lot of it appears to be practical effects despite the presence of CGI.  It’s a wonder anyone could survive anything like that.  If you don’t drown, the shear amount and variety of debris getting washed around should most certainly kill you.  And if you survive, you’re so busted up you must find a hospital as soon as possible or you’ll succumb to your wounds. 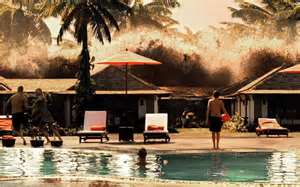 Naomi Watts was nominated for an Academy Award for her grueling performance as a mother searching for her family while trying to keep herself together (literally and metaphorically).  Even her oldest son (Tom Holland, who gives a fine performance) finds it hopeless to find the rest of the family who are most certainly dead.  But the completely eviscerated Watts encourages him to not give up on hope and help others in need, which he does with heartwarming results. 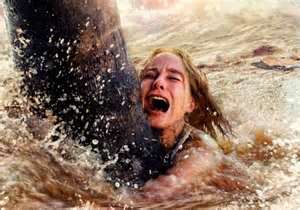 This movie has at least four or five heart wrenching moments that, for most human beings, would result in some kind of waterworks.  I almost cried at each of those moments but the tear ducts malfunctioned.  It triggered the response; emotions welled up inside me but no dew.  I guess I’m dead inside and my heart is black as coal and twice as dusty.  In my defense, my eyes got a little damp at the end of Beasts of the Southern Wild.  Whatever the case, anything that can stir my emotions is worth a watch.

7 thoughts on “The Impossible (Not to Cry)”