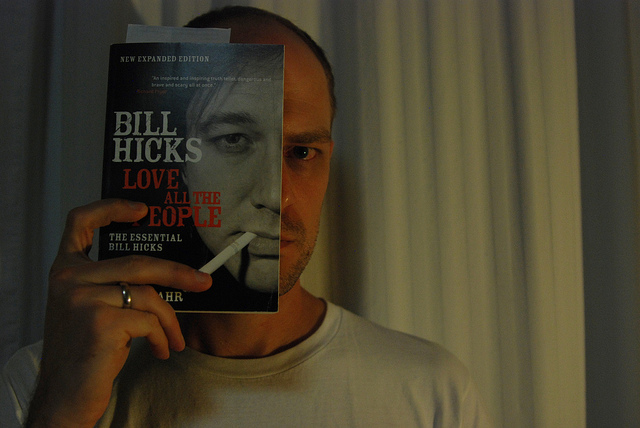 I’m about 96% sure I stole this picture idea from my fellow Cinematic Attic writer Jessica. I’m about 93% comfortable with that. What can I say, it’s a good idea!

Alternate Title: Ryan Reviews…A Book?!? Yes, a book. But it does have some connections to movies. I have previously talked a bit about books, movies, and the transition between one and the other, but this is the first review in which I’ll talk specifically about a book.

As you may or may not (but probably “not”) know, I’ve been doing a book-reading project the last two years called “Sitzbook.” In my project I read a book a week and then do a bit of a write-up about it. This year’s first book was Bill Hicks: Love All The People, a sort of anthology of stand-up routines and other material by Bill Hicks, one of the greatest comedians ever, in my opinion.

I’ll get back to the book in a minute and throw some big quotes at you, but first let’s get a bit of background information out there. Bill Hicks was a comedian from Texas who rose to at prominence in the late 80s. He was “controversial” in that he talked a lot about politics, society, and drugs. He unleashed his wrath on the first two, and as for drugs, he was a major opponent of the hypocrisy surrounding drugs. Although his comedy could be angry, bitter, and often vulgar, he still strangely seemed to come at the whole thing from a place of love and compassion (hence the book’s title). His comedy seemed to reflect an exasperation at the decline of society, but he seemed to genuinely want to change things for the better:

As part of the change he was seeking, it was only natural that Hicks set his sights on the politicians and the political and social issues of the day. A lot of his criticism was certainly directed towards the first Iraq war and the first President Bush, who was in power during Hicks’ heyday, but he also criticized the Democrats and politicians in general (he talked a LOT about the Kennedy assassination and called Bill Clinton and Janet Reno “mass murderers” because of their response to Waco, so it’d be a stretch to call him a puppet of the left).

Strangely, even though so much of his material focused on life in the US, he gained a lot more of a following in the UK than in America. Still, I personally know a lot of Americans who think he was great, so he must have been really big overseas. Unfortunately, though, he died of cancer in 1994. I didn’t hear of him until 2002, when I visited my friend Brian in Munich and almost passed out from laughing while listening to Hicks’ albums. That was at least 10 years after a lot of the material on those albums, and now another 10 years has passed. Yet almost none of the material seems dated; in fact, some of the bits seem almost eerily prescient, as we’re still dealing with a lot of the same problems Hicks talked about (such as gun control, politics, and Billy Ray Cyrus).

For example, gun violence was as much of a problem in the US in Hicks’ time as it is today. When reading the book after a 2012 full of prominent shootings, I was struck by how little has changed. Hicks also talked about gun control and after quoting the second amendment, he comments that:

[…] A child could explain this to you if he or she wasn’t busy ducking for cover, or being strip-searched on the way into their grade school.
Here is the problem as I see it—a lot of very fearful and confused people in this world are heading towards realizing their own self-fulfilling prophecy. They’re advocating a right that does not exist (at least constitutionally, as we’ve seen) to arm themselves to the teeth and ‘protect’ themselves from unnamed predators who, they believe, want nothing more than to break into their homes, rape their fat wives, and then steal all their bowling trophies.‘”

If you think about it, that could have been written today, and seeing as he said it years before Columbine and all the shootings that it preceded, his comments about schools are almost chilling. It’s provocative, dark, and bitterly funny at the end, which is a good description of his style (and Hicks himself, for that matter).

Drugs are another thing that Hicks loved to talk about, and they come up in the book and in his routines a lot:

His biggest pet peeve was hypocrisy and its myriad forms, and this came up often when he talked about drugs. For example, the book contains many interviews that Hicks took part in, and here’s what he said in one of them about drug use in general:

“You have all this hype and all these shows about the terrible drug wars that are going on in America and in-between you have all these alcohol commercials. Come on, you can’t tell me that you don’t see the irony there. Cigarettes kill more people than all illegal drugs combined times 100. This is a fact and there is no way we can weasel around it.”

He also lashed out more at cigarettes and alcohol and the hypocrisy surrounding them in his stand-up gigs. The following quote from a routing naturally looks a bit strange in print, but if you watch or listen to Hicks perform the words it has even more impact:

“I got some other shocking information. Tell you this? I know you don’t know this, so I feel it’s my duty to tell you, thus to pass on knowledge: alcohol brrrrrrrrrr is a FUCKIN’ DRUG!… a). b) –and here comes the big one – brrrrrrrrrr alcohol kills more people than crack, coke, and heroin COMBINED EACH YEAR! […] ‘It’s OK to drink your drug. Ha ho, yeah! We meant those other drugs. Those untaxed drugs. Those are the bad ones.’ […]
My life is infinitely better now that I’ve quit taking drugs. But my life would be infinitely worse had I ever been arrested for taking drugs. That’s my fucking point.“

It’s pretty obvious that I thought the book was good, although due to its nature (an extensive compilation) a few of the routines collected in the book can get a bit repetitive. But that’s hardly Hicks’ fault–it’s just how comedy works. If you want a quicker fix, though, I’d recommend the excellent movie biography called American: The Bill Hicks Story, which I watched recently. It has selections of Hicks’ material, but it also tells his interesting story, and it makes the fact that he died so young (at the age of 32) that much more sad.

So, whether it’s through American, one of Hicks’ stand-up CDs, or this book, I’d recommend you check out this brilliant comedian that we lost far too soon.