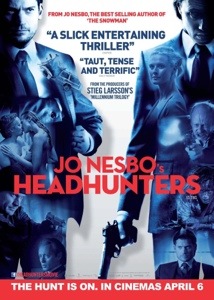 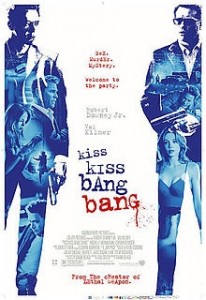 After reading the short synopsis of the Norwegian film Headhunters, I figured it was gonna be a thriller in the vein of Girl With the Dragon Tattoo (and as the poster eloquently reminded me, the films share a producer). What I wasn’t expecting was a brilliant dark comedy mixed with extreme violence and gore.

Roger Brown (a VERY strange name for a Norwegian) is a recruiter (or “headhunter”) for major corporations with a beautiful wife and a beautiful home that looks like a showroom at Ikea. To pay for his extravagant lifestyle, Brown steals works of art from the rich men he recruits with the aid of Ove Kjikerud (now THAT’S a Norwegian name), a gun loving security guard. Everything is going great until he meets Clas Greve (played by Jaime Lannister on Game of Thrones, looking like a real-life Prince Charming from Shrek). Soon, his head is being hunted (get it, the title works both ways… those clever Norsemen) and he doesn’t know who is after him, or why they are trying so hard to kill him. Do they know he is a thief? Does this mysterious hunk Clas want his beautiful wife?

The film reminded me several times of the Coen Brothers. The tone is most like that of No Country For Old Men with people getting double crossed at every turn. There are also scenes of sudden, extreme violence that sometimes literally made me cringe. As many know, I’ve seen some truly messed up movies in my day, so if a movie can make ME cringe, it MUST be good! I give it a 14/17.

Next up is another film that surprised me: Seven Psychopaths. I had wanted to see this movie mainly because the director, Martin McDonagh made the vastly underrated In Bruges. I loved that film but after first seeing the trailer to Psychopaths, I lost most of my excitement (oddly enough, the trailer for In Bruges was also off putting and lame, this guy needs a new trailer editor). When it came out on DVD, I figured I would give it a chance and it was fantastic!

The film tells of a guy, Colin Farrell, writing a screenplay about 7 psychopaths. His best friend, played by the always brilliant Sam Rockwell, steals dogs with Christopher Walken and collects the rewards. They steal a local mafioso’s shih tzu and all hell breaks loose. 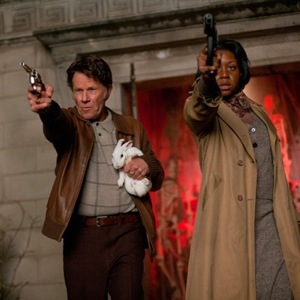 That’s right boys and girls! Tom Waits is in this and he is crazy as always.

The best way to describe this film would be Adaptation directed by Guy Ritchie. As the film progresses, the script Farrell is writing begins to become the film we are watching. It all becomes meta and self-referential, which sounds pretentious, but the film handles it in a very laid-back fashion without pounding the audience over the head with its cleverness. As with Headhunters, Seven Psychopaths was far more violent than I expected. Some of it I was actually surprised got past those wonderful censors at the MPAA. But the film also has moments of extreme sadness and beauty. When people die in the movie, it isn’t used for laughs as in other dark comedies. Instead, McDonagh understands the seriousness of death and isn’t so low as to use it as a gag. I give this one a 16/17. Check it out!!!