We, the Editors of Cinematic Attic, have been feverishly watching movies in the last week in attempt to get as many thoughts and perspectives as possible about 2012’s offerings. We’ve compiled a list of our collective Top 12 Movies of 2012, which we’ll reveal in a few days, but in the meantime, each of us has chosen a movie to write about. All of the movies we’ll discuss made our group’s Top 12 list, but as you’ll see, not all the movies were universally lauded. 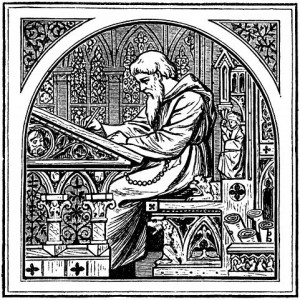 Here at Cinematic Attic, we make our lists the old-fashioned way. (Image from Wikimedia Commons)

Over the next few days we’ll post at least one article per day about a movie from our Top 12 list, and at the end of the week we’ll reveal our complete list. In the meantime, you can still throw in your two cents by voting for your 3 favorite 2012 movies in our Readers’ Poll, which we’ll also analyze when the dust settles.

So, we now give you Paul’s thoughts on The Dark Knight Rises. However, you should note first that in one draft of our Top 12 list DKR was very highly-rated, but Paul didn’t quite agree with that rating. He volunteered immediately to write an article about why the movie (and possibly our rating system) was flawed. Here is his article:

PAUL: I donʼt want to be too preachy, but I thought I should preface this review with some of the thoughts that I had while going into the theaters to see The Dark Knight Rises for the first time.

Having been close to the theater shootings in Aurora, those events forever altered my perception of this film. Theyʼd always be tied together in my mind, and while everyoneʼs expectations were already high for The Dark Knight Rises, those events sent my expectations for the film into the stratosphere. Somehow, this film would have to justify everything which had happened. This film would have to be so awe-inspiring that it would be able to pull people together, to single handedly re-unite the entire community after a tragedy, and if any movie could do it, why not this one? Itʼs based around a crime-fighter, a man who talks about sacrifice for the people. It bridges the gap between fantasy and reality, much like the gap which separates an audience from the outside world when they walk into a theater; the same one which was bridged by Fuck-Face McGee in July. Pretty lofty expectations, I admit.

But on the flip side, I knew that I couldnʼt let myself get worked up over this. Just like no one could have foreseen Heath Ledgerʼs death between these two films, altering the ultimate look of the third film in the trilogy, the filmmakers also couldnʼt have seen an event like this taking place at their premiere. They canʼt instantly make their movie the most incredible and death-defying flick in the history of cinema, just because some dickwad decided to latch himself onto one of their characters and ruin their premiere. So it had to be just another movie. I couldnʼt build it up in my mind.

So, I went into The Dark Knight Rises with a split desire. I wanted it to remind me why we still go to the movies in social settings which are sometimes painful to bear, but at the same time, I didnʼt want to be let down because I KNEW that it couldnʼt be that good.

The problem was, it wasnʼt that good; and then it got worse. I felt like Christopher Nolan tried to make the movie that everyone wanted, but in the end, buckled under the weight of the massive story he was trying to tell. Plot holes opened up like a Gotham City football field. Too many promises were made which couldnʼt be kept; characters appear and disappear (or are blown off screen) with little dramatic impact, and in their wake, weʼre left to wonder why they ever bothered showing up at all. Without blatantly pointing out every problem with this movie (thereʼs several videos on youtube that do this for me), it just felt lazy. Unlike what people like to point out as “plot holes” in Prometheus, The Dark Knight Rises was rife with real plot holes. Simple steps could have been made to ensure that all the pieces fit together, but instead we were left with a half-hearted attempt at epic meaningfulness.

But one of the things that bothered me most about The Dark Knight Rises isnʼt something I was expecting when I went into the film, but ties immediately back into my needs going into the theater: Batman is a bridge between reality and fantasy, both in the fact that we go into movies as an escape from reality, but also in the fact that the last two films in the series have worked incredibly hard to make this man that dresses up in a bat costume a part of our everyday lives. We accept him as someone that could conceivably exist. In this film, however, all of that disappears in an instant. Like every super hero, Batman uses his costume to hide his real identity from his enemies, so when his enemies find out who he really is, his costume shouldnʼt be necessary anymore. It ceases to be important, especially since he doesnʼt derive any real power from it. So, when Bruce Wayne magically reappears in Gotham at the end of the movie, still hiding behind the mask which isnʼt fooling anyone anymore, this made him feel more scared and weak than ever before to me. The fact that he was then unable to sacrifice himself to save the city at the end (spoiler!: he does save the city but he comes out alive) tells me that he was never ready to carry through with what he was preaching in The Dark Knight:

“Itʼs happening now. Harvey is that hero. He locked up half the cityʼs criminals, and he did it without wearing a mask. Gotham needs a hero with a face.”

He was finally given the chance to “be the hero that Gotham needs”, and he couldnʼt do it. I mean, shit. This is a burden that Tony Stark was willing to take on after the first Ironman! So while weʼre all glad(?) that the millionaire playboy Bruce Wayne gets to live the rest of his life in anonymity away from the problems he promised to protect the world from, he never really makes a character change, and all of his promises up to this point all of a sudden feel incredibly empty.

Thatʼs why The Dark Knight Rises is one of my least favorite movies of the year. Not because it couldnʼt live up to my lofty expectations, but because, even aside from all of its plot holes, it actually managed to negate some of the greatness of the movie before it by not having its hero follow through with his own expectations of what a hero needs to be.