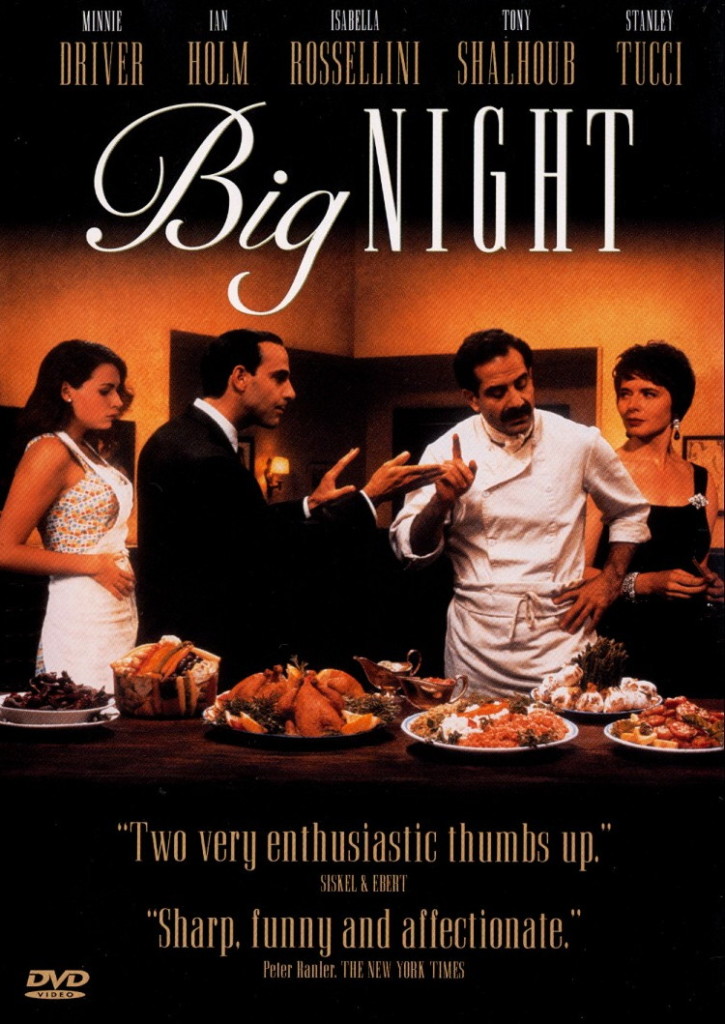 Hello! We’re back with another edition of “You Just Don’t Get It, Do You?” Tonight we’ll be taking a look at the 1996 movie Big Night.

I just didn’t get this movie. I believe it had been recommended by my friend Brian, who has great taste in just about everything. And then my mom even mentioned that she’d heard something about it, so I thought I should finally check it out. I’m still not sure what the fuss was about.

It’s the story of two brothers from Italy who own a restaurant in America. That’s the background, but it’s also the plot summary. Basically, they’re going to cook a big meal to try to stave off bankruptcy. And some people come to the restaurant. Now, I can appreciate movies that are all about setting the scene and taking their time to tell a good story with emotion or human interest. I loved Tree of Life, for example. But Big Night just left me feeling disinterested.

People online were talking about the character development, the food, and the music. I can’t say the music stood out, but maybe if I listened to it without the movie, it’d be good. As for the food, sure, it looked interesting, but the main food scene that got my attention was the one at the end where Stanley Tucci makes some scrambled eggs and everyone eats them…very slowly. And as for character development, I think we’re supposed to kinda side with the brother (played by Tony Shalhoub). He’s OK, but he’s also stubborn to the point of alienating everyone. Tucci is also kind of a creep, as he’s cheating on his girlfriend (Minnie Driver) with Isabella Rossellini. I guess we could side with one of the women, but they’re kind of one-dimensional and neither is very interesting. A screenshot from the big chase scene.

Oh, and then there’s Skeletor (played by Marc Anthony). In fact, he’s in the opening shot of the movie. I guess I should have maybe taken that as fair warning. I don’t know if he’s done anything of note ever (except somehow getting Jennifer Lopez to sleep with him), and in this movie he’s just about as useless as an Alpenhorn at a funeral.

To Summarize:
What I Didn’t Get: Who exactly gets into this movie so much? Italian-Americans? Pasta fetishists? Stanley Tucci completists?
Who Might Get It: Members of the Isabelluminati, the branch of the Illuminati that believes that Isabella Rossellini is the second coming of the Prophet Elijah.
Why I Probably Should Have Known Better: Three words: “Featuring Marc Anthony.”

Has anyone else seen this movie? If so, what did you think? Just because I didn’t “get” it the first time around doesn’t mean I’m not open to new interpretations and ideas.