… and it turns out it’s got nothing do to with pimps. Well, not normally, at least. 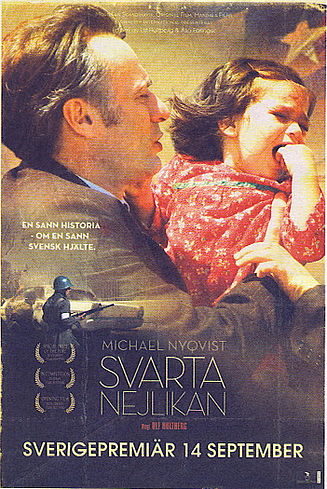 Let’s take a step back for a moment. I’m referring not to the Scarlet Pimpernel, but rather The Black Pimpernel, a Swedish/Chilean movie released a few years ago. It tells the story of the Swedish ambassador to Chile during the 1970s Pinochet revolution. He saved around 1,300 people from likely death, and is often compared to Oskar Schindler.

The movie was pretty good, although it does seem to take a bit of time to find its rhythm. The main part of Ambassador Harold Edelstam is played by Michael Nykvist, the guy who was Michael Blomkvist in the original Swedish Girl With The Dragon Tattoo series. He does an OK job, but to be honest, it could be better. That actually goes for all the Swedes, unfortunately.

Don’t get me wrong: I love Sweden, Swedes, and Swedish, and I’ve been known to dabble in the language (and country) myself. So when the Swedish ambassador and his assistant are speaking in English, it just seems weird. Especially since the parts that would have naturally been in Spanish are indeed in Spanish. Same with English, which was likely used in some communication. But that mere fact –that non-native speakers were speaking English, when in real life they wouldn’t have– distanced me from every scene in which that happened. Plus, the only Swedish I got to practice was when Nykvist said “Herre Gud!” so I was a bit disappointed.

In terms of a new take on an interesting historical story, I’d give this movie a 15/17. In terms of acting, I’d give it a 11/17. Overall, I’d say 12/17. The story is indeed very interesting, and anyone with even a superficial interest in Chile or Latin America should at least read more about it, and possibly check out this movie.